Thanks to the great fans!

Published 10/09/2012
A thread to thank the fantastic fans from yesterday that had class about the whole Cassel situation. And there were many and we ARENT ashamed to be CHIEFS fans!!! Yes!

you be the judge on this video

Published 10/09/2012
here is a video of cassel after he gets hurt. You be the judge if people were cheering for him to be hurt.

Is this the cheering Chiefsâ€™ Winston blamed fans for? – KCTV5

someone who thinks eric winston is wrong

Chiefs fans are so wonderful :)

Published 10/09/2012
I was just planning on editting you and allowing you to compose yourself, but you p***ed me off, with the spam and general isiocy, so I decided you should pipe down for a bit….

After the Loss .. maybe there's some spark!

Our D stand up and play in great level.

Our RBs a doing pretty good job. I hope we can let JC rest time on time and not make it our only weapon.

But for sure it was pretty clear that OC and HC don’t trust Cassel anymore.

Today game plan may be was take some heat off from Cassel. But I guess instead help him out. Make him look worse. 2 Ints .. and a fumble that kills Matt last chance for redemption.

Clearly on the drive he got hurt you can see that Cassel got fear, insecurity and most important he loose his teamates trust.

I see tru whole game Quinn with the Helmet On ready to get in. And As soon he get into the game ..

I can see a clearly change of mentality .. a SPARK ..
CONFIDENCE .. and DESIRE .. after being not able to throw a pass for so long. He look pretty good on his first attempt. May be deep inside Cassel’s Teamates they were lookin’ for Quinn to get in and show more confidence and provide more leadership than Matt actually shown thru all the game.

This week will be a Nightmare for Cassel, Romero and mostly Pioli.

Piolio IMO can’t any more say there’s no competition for Matt .. Isn’t clearly that Cassel already lost the faith of their mates?

Quinn need to excel on practice .. and backup that spark WE all see when he take the controls at Offense.

If Matt is healthy and clear for play .. how long will be in the field? The pressure won’t only come from the fans .. will come from the team itself.

I guess that Quinn will get a LOT of snaps this week.

and if he can keep that spark going at least we could become a competitive team.

IMO Pioli’s job is already going down toilet, as soon as Quinn shows much more leadership than Cassel. He will be doomed.

Also I guess that Quinn will develop a better Passing distribution. Not only focus on D.Bowe .. J. Baldwin had show flashes .. and maybe all Jonathan needs was a different QB. Also if Quinn success JC could be NFL leading rusher.

What are your thoughts of that SPARK that teams showed with Quinn at QB.. 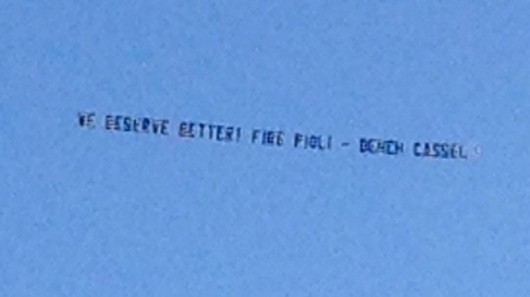