Eleven days after a car crash involving Chiefs outside linebackers coach Britt Reid that seriously injured a five-year-old girl, she has emerged from a coma. Via Dan Wetzel of Yahoo Sports, that’s the latest update posted by the girl’s aunt on a GoFundMe.com page that has raised nearly $500,000 for Ariel Young’s medical expenses. “Ariel [more] Read more… The Chiefs came close to realizing their “Run it back” slogan for 2020, reaching Super Bowl LV. Though they lost, they’re set up to return many of their key contributors for another run at a championship in 2021. That will apparently include one of their defensive assistants. ESPN’s Dan Graziano reports linebackers coach Matt House [more] Read more… 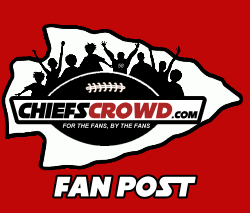 It’s been a week now since the Super Bowl. Still a bummer

Needing a pick me up I went back and watched some old Chiefs games. One of the games I watched was the season opener from 2012 (Yes I hate myself)

It didn’t take me long to find humor in that team. In fact it came on one of the very first offensive drives of the season. 3rd down Cassel makes actually a pretty nice pass to get a first down but it’s called back due to holding setting up 3rd and 20 something. Cassel makes a dump off Read more… The Chiefs took wide receiver Mecole Hardman in the second round of the 2019 NFL draft primarily because of his speed, which was reflected in a 4.33-second 40-yard dash at the Scouting Combine. But Hardman wants to be known as more than just a fast guy. With the Chiefs unsure whether Sammy Watkins will return [more] Read more…

Patrick Mahomes favored over Aaron Rodgers to be 2021 NFL MVP Chiefs quarterback Patrick Mahomes is the early favorite to win league MVP for the 2021 NFL season. Mahomes is listed at +500 in the DraftKings odds, making him the preseason favorite. He’s followed by the 2020 MVP, Packers quarterback Aaron Rodgers, who is at +800. Rodgers is fresh off his third MVP, and if he [more] Read more… Where will J.J. Watt land? Chiefs fullback Anthony Sherman becomes a free agent in March, but he’s not planning to shop himself to the highest bidder. Instead, Sherman says, he’s willing to take less money than he thinks he deserves if it means staying with the Chiefs, where he believes he and his teammates have a great chance of winning [more] Read more…